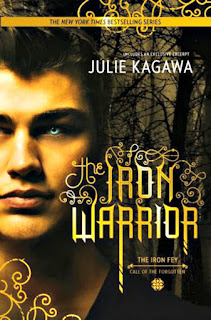 The Iron Prince – my nephew – betrayed us all. He killed me. Then, I woke up.

Waking after a month on the brink of death, Ethan Chase is stunned to learn that the Veil that conceals the fey from human sight was temporarily torn away.

Although humankind’s glimpse of the world of Faery lasted just a brief moment, the human world has been cast into chaos, and the emotion and glamour produced by fear and wonder has renewed the tremendous power of the Forgotten Queen. Now, she is at the forefront of an uprising against the courts of Summer and Winter – a reckoning that will have cataclysmic effects on the Nevernever.

Leading the Lady’s Forgotten Army is Keirran himself: Ethan’s nephew, and the traitor son of the Iron Queen, Meghan Chase.To stop Keirran, Ethan must disobey his sister once again as he and his girlfriend, Kenzie, search for answers long forgotten. In the face of unprecedented evil and unfathomable power, Ethan’s enemies must become his allies, and the world of the fey will be changed forevermore. (Goodreads)

The Iron Warrior is the final book in Julie Kagawa’s Call of the Forgotten series, featuring Ethan Chase (the Iron Queen’s brother). And what a finale! Totally worth the wait!

The story picks up shortly after book 2, with Ethan waking up in his sister’s castle. After being in a coma for almost a month, Ethan is anxious to find out what happened after his nephew stabbed him.

Unfortunately, Keirran’s plan worked and humans had a brief glimpse of Faery when the Veil fell. Needless to say, things will never be the same.

The Forgotten, with Keirran leading their army, are gaining strength. In response, the other faery courts are chomping at the bit to declare war and go after Keirran for his betrayal. It’s hard to disown a family member, but no one can deny what happened. Poor Meghan and Ash!

Ethan is reunited with his girlfriend Kenzie, and they decide that they need to help Keirran try to find his way back to the light. A fools errand? Maybe, but they have to try.

Really enjoyed this story! Several of my favorite characters have return appearances and, while I wish that Grimalkin had a larger role (love that sassy cat), I know this is Ethan’s story. Luckily, he more or less holds his own.

Great writing, well paced plot, and an ending that will have you in tears and then smiling, then in tears again! What a finale to a great series! Now if only the author would give Puck his own series…