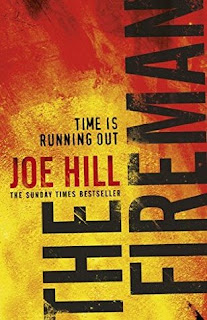 No one knows exactly when it began or where it originated. A terrifying new plague is spreading like wildfire across the country, striking cities one by one: Boston, Detroit, Seattle.

The doctors call it Draco Incendia Trychophyton. To everyone else it’s Dragonscale, a highly contagious, deadly spore that marks its hosts with beautiful black and gold marks across their bodies – before causing them to burst into flames. Millions are infected; blazes erupt everywhere.

There is no antidote. No one is safe. (Goodreads)

All good advice, which I did not follow. I judged. I judged hard.

The Fireman is a bear of a book, well over 700 pages! I don’t normally read books this big because frankly, they intimidate me. Thankfully I had an ecopy of the book so couldn’t be intimidated by its sheer massivity.

And the author is the son of Stephen King (the emperor of ginormous books), so I foolishly assumed there was narcissism involved.

I judged. And I was wrong.

The Fireman is an amazing story! And no narcissism in sight, as Joe Hill can write!

The book is set up in a unique way that I haven’t come across before, with a new section starting with each big event or major development in Harper’s story. So rather than simply progressing with regular chapters, you start over with chapter one for each new section, called “Books.” So you have Book One, Chapter One all the way to Book Nine, Chapter 34. Didn’t really care for this set-up, but it was original at least.

Harper is a nurse, working first at an elementary school and then volunteering at a local hospital when the schools are shut down and the epidemic worsens. We see the progression of the outbreak through her eyes and I have to say that it’s more than a little terrifying.

No one knows how the infection is transmitted, so paranoia runs rampant. Have to say that it’s kind of genius when we finally find out how it actually spreads. Makes sense too.

Harper eventually becomes infected and her life turns upside down. To make matters worse, she discovers that she’s pregnant. With a new determination to bring her baby safely to term, Harper must learn to survive at any cost.

The story reminded me a little of Lord of the Flies because it shows how quickly civilization can break down. When people feel threatened, all bets are off! A sad commentary on humane behavior, but totally believable.

Don’t want to give too much away, but Harper does come across other infected survivors and they form a tribe of sorts. Have they discovered a way to control the dragonscale? Or are they just delaying the inevitable?

Really enjoyed this story and it didn’t drag for me at all. Had a decently paced plot, interesting characters, and a totally believable premise. Terrifyingly believable. And despite the mammoth size of this book, I never felt like it dragged at any point or found myself wishing for a stern editor to tighten up the story. I know! I was amazed too!

Am actually looking forward to reading more of Joe Hill’s books! I guess talent does run in the family!