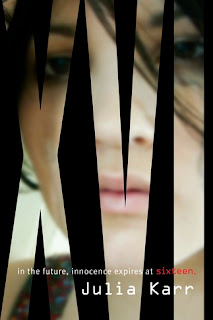 Nina Oberon’s life is pretty normal: she hangs out with her best friend, Sandy, and their crew, goes to school, plays with her little sister, Dee. But Nina is 15. And like all girls she’ll receive a Governing Council-ordered tattoo on her 16th birthday. XVI. Those three letters will be branded on her wrist, announcing to all the world – even the most predatory of men – that she is ready for sex. Considered easy prey by some, portrayed by the Media as sluts who ask for attacks, becoming a “sex-teen” is Nina’s worst fear. That is, until right before her birthday, when Nina’s mom is brutally attacked. With her dying breaths, she reveals to Nina a shocking truth about her past – one that destroys everything Nina thought she knew. Now, alone but for her sister, Nina must try to discover who she really is, all the while staying one step ahead of her mother’s killer. (Goodreads)

My Thoughts:
This story was amazing! It grabbed me on the very first page and wouldn’t let go. I LOVE it when that happens!!!

The main character, Nina, is fifteen and not looking forward to her sixteenth birthday. All girls are required to get a tattoo when they turn sixteen, letting the world know that they are no longer jail bait. Really? A tattoo basically marking you as ready & willing to have sex? At sixteen??? *shudder*

Nina lives with her mother and half-sister, and has a hard time understanding why her mother stays with her married boyfriend, who sounds like a total sleaze. Aside from the fact that he’s a married man, the creep also beats her. Not a nice guy. Her best friend Sandy lives next door and, unlike Nina, is actually looking forward to becoming a “sex-teen”. I liked Sandy, as I felt that she was a little naive and had bought into the media hype of how wonderful turning sixteen would be. She was a nice girl at heart, but practically brainwashed by the media. Luckily, Nina was raised by a mother who taught her to think for herself, despite the danger.

Nina’s mother is brutally attacked one night and doesn’t survive. Poor Nina must now deal with trying to protect her little sister from evil-scumbag-dad, while struggling with her fears of turning sixteen, and dealing with the earth-shattering revelation from her mother. Nina has to grow up fast, but she has loving grandparents and good friends to help her along the way. I really liked her friends, both old and new. In fact, the only character I didn’t like was the evil-scumbag-dad.

Have I mentioned how amazing this story was? Great characters, incredible writing, well paced, and kept me up much too late as I just couldn’t put the book down! The story simply grabbed hold of me and I couldn’t wait to see what happened next! The very thought of the mandatory XVI tattoo on a girl’s sixteenth birthday was chilling, and I loved the description of how pervasive media had become, where you couldn’t even walk down the street without being bombarded by ads. Her descriptions of everyday life with what sounded like Big Brother gone mad was both intriguing and terrifying. The scenes really came alive for me, and what was scary was that they didn’t sound too far-fetched, as media influence is already out of control.

I think that this book is definitely a must read for anyone who appreciates a good story, no matter your preferred genre!