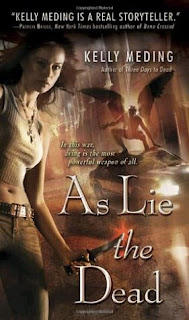 As Lie the Dead by Kelly Meding

Evangeline Stone, a rogue bounty hunter, never asked for a world divided between darkness and light . . .

. . . or the power to die and live again in someone else’s borrowed body. After a murder plot meant to take her out leaves an entire race of shapeshifters nearly extinct, Evy is gnawed by guilt. So when one of the few survivors of the slaughter enlists her aid, she feels duty-bound to help – even though protecting a frail, pregnant shifter is the last thing Evy needs, especially with the world going to hell around her.

Amid weres, Halfies, gremlins, vamps – and increasingly outgunned humans – a war for supremacy is brewing. With shifters demanding justice, her superiors desperate to control her, and an assassin on her trail, Evy discovers a horrifying conspiracy. And she may be the only person in the world who can stop it – unless, of course, her own side gets her first. (Goodreads synopsis)

This book was seriously awesome! Awe-some! Read it in one day, despite having a giant to-do list and a stack of TBR books glaring at me for ignoring them. Couldn’t help it, because once I read the synopsis, I simply had to download it to my nook and read immediately. Did I mention that it was awesome?

The story picks up shortly after Three Days to Dead, but I think you’d be able to follow it without reading the first book. However, both books are great reads, so I recommend reading them in order so you can get the full experience.

Really like Evy, who is still trying to adjust to being in another person’s body. While she was a highly trained hunter in her original body, her new body doesn’t respond the same way and that’s a distinct disadvantage during a fight. There’s also the freaky factor of feeling another person’s reactions and emotions every now and again.

Evy is going through quite an adjustment, has an overflowing plate, but is still able to get the job done without coming off like an annoying superhero. Despite her awesomeness, Evy is still relatable and sympathetic. Although she would probably kick your butt if she thought you were pitying her!

Gave this one a 5/5 as I couldn’t put it down once I started! Loved the characters, great writing, fast paced plot, and thought it was a great continuation to the series! Looking forward to the next book, as I can’t wait to see what happens next with Evy, Wyatt, and the triads/dregs relationship!