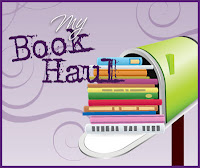 I find myself in need of a new way to showcase titles as, for personal reasons, I decided to no longer participate in The Story Siren’s IMM meme. So I am “test driving” different alternatives. I like giving books a little special attention as sometimes it can be awhile before I’m able to review them. Sad to say, but some get put on the shelf and gather a little dust before I’m able to give them the love they deserve. There are several Book Haul memes around and I’m not sure who originated it, but I discovered it over at Anna’s Book Blog.

For Review:
If you’ve spent any time on this blog, you’ve probably caught on to the fact that I’m a huge Jennifer Estep fan. A humongazoid fan! As in will read anything she writes and rave about it because I think that she’s made of awesome type of fan! So was beyond thrilled (happy dance) when I received an eARC of the next book in her Elemental Assassin series! Love Jennifer! Love Gin! Love this pretty, pretty story (pets nook)!

Widow’s Web by Jennifer Estep
My name is Gin, and I kill people. It’s something I’ve been doing for years as the assassin called Spider, but now, it’s turned into a necessity on my part just to survive all the lowlifes in Ashland who are gunning for me. The underworld is still in turmoil, and I seem to be on everyone’s hit list these days.
***
This was an email review offer from Novel Publicity. Didn’t sound like my type of book at first, but read an excerpt and was hooked! A great example of why you shouldn’t judge a book by it’s cover or synopsis!

Sykosa by Justin Ordonez
Sykosa (that’s “sy”-as-in-“my” ko-sa) is a junior in high school. She belongs to an exclusive clique of girls called the “Queens.” The leader is her best friend Niko. Their friendship has been strained lately because Tom—Sykosa’s first boyfriend boyfriend – has gotten all serious about making her his pretty Prom princess. That is if he ever gets around to asking her.

Swapped:
This is one of those books that I read a long, long time ago and enjoyed it so much that I shared it to a friend. Not sure why, but I had the impulse to reread it a few weeks back, so was happy to find it on Paperback Swap! It’s a little more dinged up than I’d like, but still readable. Three women get the chance of a lifetime, to relive a few weeks in their past! I remember spending more time than I’d like to admit wondering which period I would choose to relive if I had the chance…..still not sure.

The Summerhouse by Jude Deveraux
Have you ever wanted to rewrite your past?

What did you receive in your mailbox this week?
Leave me a link and I’ll stop by to check it out!
This content is owned and copyrighted by alexia561.blogspot.com.