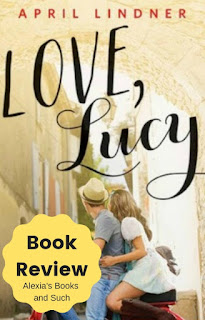 **ARC received from the publisher**

While backpacking through Florence, Italy, during the summer before she heads off to college, 17-year-old Lucy Sommersworth finds herself falling in love with the culture, the architecture, the food…and Jesse Palladino, a handsome street musician.

After a whirlwind romance, Lucy returns home, determined to move on from her “vacation flirtation.” But just because summer is over doesn’t mean Lucy and Jesse are over, too. (Goodreads)

In exchange for attending her father’s choice of college, majoring in business, and giving up acting, Lucy’s parents send her and a friend on the vacation of their dreams:  a month-long backpacking trip through Europe ending in Italy, Lucy’s favorite country.

Arriving in Florence, Lucy is eager to start exploring and doesn’t want to waste a single minute. Charmed by the city, she is determined to enjoy herself after a falling out with her friend. While wandering around town, Lucy runs into one of the hotel workers busking in a piazza and he offers to show her around.

Lucy and Jesse have a whirlwind romance, starting in Florence and continuing to Rome. It’s the perfect vacation romance, her very own Roman Holiday (Lucy’s favorite movie).

But all good things must come to an end and soon Lucy is starting college and trying to settle into her new life. Despite promises to keep in touch, Jesse rarely responds to Lucy’s emails and she soon fears that he’s found someone else.

Trying to move on, Lucy finds herself drawn to the drama department and auditions for a play, despite the deal she made with her father. You just know that this can’t end well, but Lucy is determined.

While Lucy was an okay main character, I wish that she wasn’t so wimpy when it came to standing up to her father. I didn’t like her sneaking around behind his back and breaking their deal. Should her father have insisted she give up her love of acting entirely? No. But Lucy caved and agreed to his bargain, so she shouldn’t have gone back on her word. Maybe she could have tried renegotiating or something, but I didn’t like the dishonesty.

Then there’s her relationship with a new boyfriend. Is Lucy entirely over Jesse? Should she enter a new relationship if she isn’t? Will she ever hear from Jesse again?

This story is based on A Room With a View, but I’ve never read the original so can’t compare them. I did enjoy the story, but Lucy annoyed me more than once with her immaturity. I think this one would make a nice beach read.