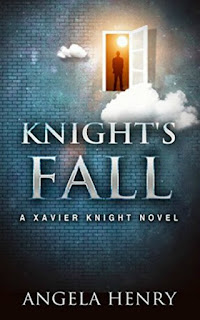 Xavier Knight was an angel – until Heaven kicked him out. Now he’s a private detective in New Orleans, trying to put his old immortal life behind him while avoiding Lucifer’s bounty hunters.

But when his latest case uncovers a plot to end the world with a supernatural drug, he’ll need all the otherworldly help he can get to stop it.

While I’ve read a book or two with fallen angels, have to say that Knight’s Fall is the first where the ex-angel is a PI. In New Orleans, no less! With just those two facts, you know it’s going to be a good read!

Loved the main character, Xavier! Despite being a former angel, he wasn’t all preachy or goody two shoes. In fact, he was more than a little annoyed that he’d been thrown out of Heaven and was now mortal. But a guy has to make a living, so he becomes a private eye.

After the initial set-up, Xavier takes on a case that isn’t what it seems and that’s where the fun really begins!

There’s a secret government agency, an addictive otherworldly drug with devastating results, and hints of a conspiracy that point towards Xavier getting his wings clipped because he was framed. And did I mention the zombies? Not your typical movie zombies either, but a whole new breed. Yikes!

There’s also a secondary story of Xavier trying to track down the woman he loved, who also caused his “fall from grace.” Strange that she no longer seems to exist, but what an intriguing explanation presented!

Xavier was front and center as the main narrator, but the secondary characters were just as good! While his was the main voice, the transition between narrators was smooth and I was never confused or disoriented by the switch.

Minx, Xavier’s savior and roommate who just happens to be a world-famous supermodel/cat shifter, was fascinating. Wanted to see more of her!

Thought that this was a well written story with interesting characters, a decently-paced plot, and an original take on angels. Already looking forward to Xavier’s next adventure!