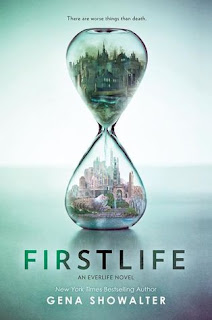 Tenley “Ten” Lockwood is an average seventeen-year-old girl…who has spent the past thirteen months locked inside the Prynne Asylum. The reason? Not her obsession with numbers, but her refusal to let her parents choose where she’ll live – after she dies.

There is an eternal truth most of the world has come to accept: Firstlife is merely a dress rehearsal, and real life begins after death.

In the Everlife, two realms are in power: Troika and Myriad, longtime enemies and deadly rivals. Both will do anything to recruit Ten, including sending their top Laborers to lure her to their side. Soon, Ten finds herself on the run, caught in a wild tug-of-war between the two realms who will do anything to win the right to her soul. Who can she trust? And what if the realm she’s drawn to isn’t home to the boy she’s falling for? She just has to stay alive long enough to make a decision…(Goodreads)

Ever wonder if there’s really an afterlife? If our time here on earth is it, or do we go somewhere else after we die? Firstlife sort of answers those questions, with an interesting premise that hooked me in the first chapter!

According to the story, there are two realms where your spirit can go after death. Troika is the land of light, while Myriad is the land of darkness. Troika is a little stricter than Myriad, but they both have pros and cons. They both also have agents who try to convince humans to sign on with their realm.

Actually, there are three options if you include those humans who don’t sign with either realm. They wind up someplace called Many Ends, which sounds straight out of a nightmare!

Didn’t care for the prologue, but loved the rest of the story!

Ten, the main character, has been sent to a horrible asylum to be tortured because she refuses to sign with one of the afterlife realms. The treatment dished out to the residents is beyond belief! What’s worse is that they’re all kids. What kind of parent sends their child to a place like that? Yikes!

Turns out that both Troika and Myriad really want Ten to sign with their realm, so they send agents into the asylum to help make up her mind. They really, really want Ten on their side, so guess that alls fair in love and war.

Really enjoyed this one, as I’ve never read anything like it! Great characters, an interesting plot, and a well-placed storyline made for a great read! Definitely a great start to an interesting new series, and I can hardly wait to see what happens next!