Austin, Hunter and Alex were inseparable during their school days, but the sudden death of their good friend Sarah Michaels tore them apart. However, her death was not as it seemed. Under the many falsehoods lies a corruption so sordid that New York’s elite would never believe it.

Now in positions of wealth and power, these men vow to use their influence to bring down the man responsible – Jason Treffen, an infamous philanthropic billionaire. With a plan in place, Austin, Hunter and Alex are ready for anything – until three very different women enter their lives, making them question their motives for revenge.

It’s been awhile since I’ve read something by Harlequin Presents, but I used to be a subscriber and couldn’t get enough of them!

They’ve changed a little over the years, as I don’t remember them being so…detailed? Graphic? Descriptive? That took me a little by surprise, but the overall stories were still good.

The first story in the trilogy, Avenge Me, was my least favorite. It’s hard to enjoy a romance when you don’t like the hero, and I didn’t like Austin at all.

While both Austin and Katy made it very clear that their sex life was consensual, he did something soon after meeting her that was so incredibly arrogant that it immediately got my back up.

He basically ruined her life, although he claimed that he did it in order to “protect” her. And while I guess he was supposed to be conflicted and tortured, he just struck me as a spoiled, rich, arrogant man used to getting his own way.

I did not like him, so couldn’t really enjoy the story.

The second book, Scandalize Me, was a little better. While Hunter starts off as a bit of a jerk and I didn’t like his actions during his first meeting with Zoe, he eventually grew on me.

Turns out that Zoe knew Sarah and wants revenge on Jason as well. I enjoyed how Hunter and Zoe gradually opened up to each other and healed each other’s wounds.

Expose Me, the final book of the trilogy, was the strongest IMO. While Alex is no Prince Charming either, at least he isn’t a total jerk to Chelsea.

She’s just as damaged as the other two women, but has made something of herself and, after meeting Alex, is ready to take a chance on love.

A true survivor, I think I liked Chelsea the best.

All three of these men were on the arrogant side, but guess that’s expected when you’re a rich and handsome Manhattanite?

I enjoyed their plot to get revenge on Jason Treffen, who deserves everything they’ve planned!

I would have liked more flashbacks of Sarah, as she seemed to have had quite an affect on all three men.

I also would have liked an epilogue or something at the end in order to wrap everything up as I felt the ending was a little abrupt, but did enjoy how the three stories were intertwined.

Just a quick heads up – these are classified as romances and while not as intense as erotica, there are several sex scenes and description, adult language.

I received a fabulous Summer In The City Essentials Kit for taking part in the blog tour, and Meryl L Moss has kindly provided a kit for one of my lucky readers! Full of amazing fashion and beauty items, you’re sure to find a new favorite! 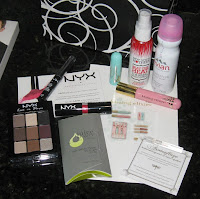