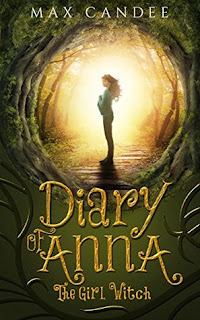 Set in the Swiss countryside, “Diary of Anna the Girl Witch” blends ancient folklore with a classic coming of age tale about a young witch on the brink of womanhood.

Anna Sophia has always known she was different. She just didn’t know how different until now. (Goodreads)

Imagine knowing that you were different, but not quite sure how. That’s how Anna Sophia felt; different, but not able to pin down the why or how. All she knew for certain was that her thirteenth birthday was going to be special, practically life altering. And it turns out that she’s right!

Found in a bear cave as a baby, raised by a trapper in the wilds of Siberia until she was six and then placed in an orphanage, Anna Sophia hasn’t exactly had an easy life. But after her thirteenth birthday, things start to happen which she can’t explain.

Thankfully, her mother left her a letter to be given to Anna on her thirteenth birthday. While it did answer some questions for her, it left Anna’s head swimming with hundreds more!

Why did she also receive a strange drawing and carving with the letter? Why was the carving of a hand so lifelike? What was the significance of the drawing? Inquiring minds want to know!

Since the title of the book says it’s a diary, there are diary entries from Anna as well as illustrations scattered throughout the book. Thought those were a nice touch.

This was a really fun story that read like it was aimed at a younger crowd, but this doesn’t detract from the books overall enjoyment in any way.

At a little over 100 pages, this was a really fast read. I enjoyed getting to know Anna and some of her friends. Thought that the story was interesting and I liked that it had a message/moral. Makes me wish my niece was young enough to appreciate this book!