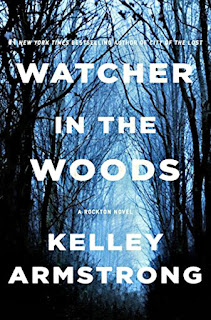 Title:  Watcher in the Woods

The secret town of Rockton has seen some rocky times lately; understandable considering its mix of criminals and victims fleeing society for refuge within its Yukon borders.

Casey Duncan, the town’s only detective on a police force of three, has already faced murder, arson, and falling in love in the several months that she’s lived there. Yet even she didn’t think it would be possible for an outsider to locate the town and cause trouble in the place she’s come to call home.

When a US Marshal shows up demanding the release of one of the residents, but won’t say who, Casey and her boyfriend, Sheriff Eric Dalton, are skeptical. And yet only hours later, the marshal is shot dead and the only possible suspects are the townspeople and Casey’s estranged sister, smuggled into town to help with a medical emergency. It’s up to Casey to figure out who murdered the marshal, and why someone would kill to keep him quiet – before the killer strikes again. (Amazon)

Watcher in the Woods is the fourth book in Armstrong’s Rockton series. While you don’t need to read the previous books, it will definitely give you a deeper understanding of the characters and town.

The book opens shortly after This Fallen Prey (book 3) with Casey and Eric trying to convince Casey’s sister April to help them with a medical emergency.

April surprises them both by offering to come back to Rockton to treat the patient herself, so they sneak her into town.

Needless to say, things don’t go according to plan.

First, a man claiming to be a US Marshall shows up, demanding that they turn over one of the residents but refusing to give them so much as a gender, much less a name. Then the Marshall winds up dead.

Rockton is an interesting town as it’s supposed to be secret. An off the grid sanctuary for those who don’t want to be found. So how did the Marshall find them? And who was he after? In a town like Rockton, everyone is a suspect.

Loved revisiting Casey, Eric, Will, and the other residents. We even meet a couple of new, incredibly interesting characters that I hope stick around.

Kelley Armstrong is one of my favorite authors, so it’s always nice to catch up with characters that feel like old friends. While I’d never want to visit the Yukon, much less Rockton, it makes for a great setting for interesting stories!

Kelley Armstrong has been telling stories since before she could write. Her earliest written efforts were disastrous. If asked for a story about girls and dolls, hers would invariably feature undead girls and evil dolls, much to her teachers’ dismay. All efforts to make her produce “normal” stories failed.

Today, she continues to spin tales of ghosts and demons and werewolves, while safely locked away in her basement writing dungeon. She’s the author of the NYT-bestselling “Women of the Otherworld” paranormal suspense series and “Darkest Powers” young adult urban fantasy trilogy, as well as the Nadia Stafford crime series. Armstrong lives in southwestern Ontario with her husband, kids and far too many pets.