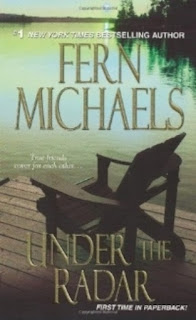 Book Blurb:
In the middle of the night, the sisterhood is your only hope. A sister’s work is never done – not when there are wrongs to right and underdogs to defend. Just returned to their mountaintop hideaway after their latest successful mission, the seven fearless friends enjoy a celebratory dinner and retire to bed. But within an hour, an alarm sounds, and the ladies rush into the compound in time to see Myra and their mentor, Charles, climbing aboard a helicopter. All that’s left is a mysterious note, signed by Charles. Still reeling, the Sisters receive an urgent call from retired justice Pearl Barnes. Pearl runs an underground railroad to help abused and displaced women, and she’s just rescued fourteen pregnant teenagers who belong to a highly secretive and controversial polygamy sect. But keeping the girls safe will require the kind of help only the Sisterhood can provide – if they can band together and go it alone…

Under the Radar is the 13th book in the Sisterhood series, featuring a group of women who have formed a sort of secret vigilante group. If you haven’t read any of the series yet, I wouldn’t recommend starting with this one, as I didn’t feel it was very strong. Okay if you already know the characters, not so much if you’re new to the series.

The book starts off by the vigilantes losing Charles, their main strategist, as he heads off to deal with a personal crisis. Myra, his lady love, goes with him at the last minute. Their’s is a secondary story, but it wasn’t very satisfying and I didn’t really like it. Didn’t feel right for some reason, especially how it ended.

The main story is the remaining women taking on their first “mission” without Charles leading the way. They have to come up with their own plan, transportation, support system, and exit strategy for the very first time. Actually, they don’t do too bad, but some things were a little too easy. Plus, for a group of intelligent women who have already completed several successful missions, they seemed a little clueless at times. And Jack and Harry’s behavior was downright annoying.

While I in no way, shape, or form condone polygamy, I didn’t like the way the polygamists were portrayed in this story. Yes, the men were slime for brainwashing and treating the women this way, but there were too many stereotypes running around. And the way the Sisters treated the women at the end was uncalled for and a little mean-spirited. Not very Sister-like at all.

All in all, didn’t feel that the plot was as well done as past books in the series. Fern Michaels is a better writer than this, so not sure what went wrong. Maybe it’s time for the Sisters to retire and have Fern move on to other series? They could do cameos every now and again, but don’t think they are strong enough to continue on their own any longer.

Only gave this one 3 out of 5 stars, as it was a disappointment. I will no doubt read the next book, should there be one, but I hope the Sisters get their act together by then.

One thought on “Book Review: Under the Radar by Fern Michaels”