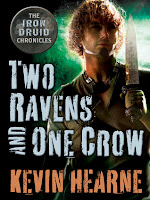 Two Ravens and One Crow
by
Kevin Hearne
Atticus O’Sullivan is back in an all-new, action-packed, laugh-out-loud novella from the author of The Iron Druid Chronicles. Two-thousand-year-old Atticus may have outwitted and outfought everyone from Odin to Bacchus, but in this eBook original, he’s about to discover what comes around when you go around messing with gods.
Six years into the training of his beautiful apprentice, Granuaile, a large crow swoops down and transforms into none other than the Morrigan, a goddess who insists that Atticus come with her at once. He must leave his apprentice behind, along with his Irish wolfhound, Oberon – and he must also leave his sword. The Morrigan has always taken extreme pleasure in pronouncing the Druid’s mortal danger and imminent doom, so the fact that she won’t reveal the purpose of their journey makes him very nervous. Of course, any time the Celtic Chooser of the Slain drops in unannounced, it’s never good. When she does let slip that she’ll be saving his life in the near future, Atticus is left to wonder . . . will he soon be giving his legions of enemies something to crow about? (Goodreads)
My Thoughts
The Iron Druid series is one of my favorites! It’s not every day you come across an ancient druid (who looks like a twenty-something hunk) and his adorable Irish wolfhound. Love them both!
Was a little sad that this was an Atticus-only story, as the Morrigan wouldn’t let him bring Granuaile or Oberon this time.  Couldn’t even bring his sword! Very strange, but Atticus has to trust that the Morrigan knows what she’s doing, as she’s not a woman (goddess) you can say no to!
Enjoyed the glimpse into the Morrigan’s life when she let her guard down for a brief moment. Atticus is the closest thing she has to a friend, which is a little sad if you think about it. The life of a goddess is a lonely one, especially when you’re the goddess of war and death. And I loved her take on baseball! Maybe Atticus will take her to a ballgame one day. That would be either terrifying or hilarious!
I think she has a small soft spot for Atticus, and she even helps prepare him for what she’s seen coming. She even protects him when an attempt is made on his life. Very exciting stuff, as the life of the last druid is never dull when the Morrigan is around!
As you’ve probably guessed from the title, Odin is involved. He is justifiably upset with Atticus after what happened when Atticus was last in Asgard. Without giving anything away, it’s never a good idea to upset a god. Especially the head honcho!
Despite it’s length, this was another great story! We have our favorite hero, some gods, a couple of fight scenes, and even a little mystery. Well done Kevin! All in all, this was a great short story to tide us over until Trapped is released in November.
Have you read this one yet? Would love to know what you thought!
This content is owned and copyrighted by alexia561.blogspot.com.