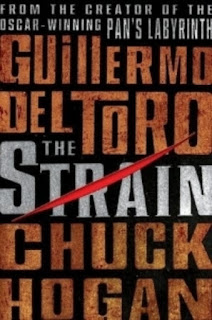 Book Blurb:
A Boeing 777 arrives at JFK and is on its way across the tarmac, when it suddenly stops dead. All window shades are pulled down. All lights are out. All communication channels have gone quiet. Crews on the ground are lost for answers, but an alert goes out to the CDC. Dr. Eph Goodweather, head of their Canary project, a rapid-response team that investigates biological threats, gets the call and boards the plane. What he finds makes his blood run cold.

In a pawnshop in Spanish Harlem, a former professor and survivor of the Holocaust named Abraham Setrakian knows something is happening. And he knows the time has come, that a war is brewing…

So begins a battle of mammoth proportions as the vampiric virus that has infected New York begins to spill out into the streets. Eph, who is joined by Setrakian and a motley crew of fighters, must now find a way to stop the contagion and save his city–a city that includes his wife and son–before it is too late.

My Review:
This book is unlike any other vampire story I’ve ever read or seen on TV or movies. I kept visualizing the scenes as I read them, either because I knew the writer was in film, or it was just that detailed. Details weren’t distracting, just really effective.

While I enjoyed the book, it did take awhile to get started. I understand that this is going to be a trilogy and that the author has to lay the groundwork, but I kept urging him to just get on with it already! However, once the action started, it was great!
Some of the main characters are Eph and Nora, from CDC, who are our resident scientific experts. We also have the wise, old pawnbroker Abraham Setrakian, who knows the time has come, that a war is brewing…Can’t you just hear the announcer for the movie trailer? *L* There are also quite a few really interesting secondary characters, but they weren’t hard to keep track of at all.
Kind of hard to review this book without giving anything away. We know it’s about vampires, because the book blurb said so. However, this is not your typical sexy, romantic John Claude type of vampire. These vampires hark back to old-school monster vampires. When I read the description, I had to pause when a visual came to mind. Definitely don’t want to date these guys!
Am considering this book horror as well as fantasy because it was so frickin’ scary. What else can I say without spoilers…..it’s well written, incredibly detailed (not in a bad way), great plot, great writing, well developed characters, believable situations, and it will make a heck of a movie! Kept me up until past midnight because I wanted to find out what happened next. Did I mention the scary monsters?

Gave this book a 4 out of 5 star rating because while it was really good, I like to save my 5’s for the great ones.