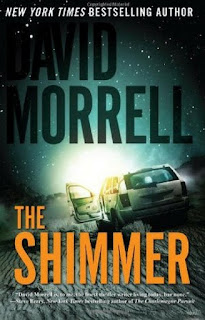 Santa Fe police officer Dan Page returns home one day to discover that his wife, Tori, has disappeared. Frantic, Page follows her trail to Rostov, a remote town in Texas famous for a massive astronomical observatory, a long-abandoned military base, and unexplained nighttime phenomena that draw onlookers from every corner of the globe. Many of these gawkers – Tori among them – are compelled to visit this tiny community to witness the mysterious Rostov Lights.

Page must solve the mystery of the Rostov Lights to save his wife. In the process, he learns that the decaying military base may not be abandoned at all, and that the government may have known about the lights for decades. Could these phenomena be more dangerous than anyone could have possibly imagined?

My first David Morrell book was Brotherhood of the Rose, which was also my first time liking movie so much that I wanted to read the book. David is a very talented writer, and you can tell that he does his research and really knows what he’s talking about! For instance, one of the main characters in this book is a pilot. David learned how to fly planes and is now a pilot as well.

The Shimmer introduces us to policeman Dan Page right in the middle of an unusual car chase. Dan had the day off and was flying his small plane, when he gets pulled into a car chase which does not end well. Dan’s day does not get any better when he returns home to find his wife Tori gone, leaving a short note that she’s gone to visit her mother. Even more surprising is the news that Tori was going to drive, but never made it. Tori is eventually located by the local police chief in a small Texas town called Rostov. Dan flies down immediately, and things go from strange to downright weird.

Rostov seems like a nice enough small town….aside from the spooky abandoned military base, a huge observatory and, oh yeah, the appearance of mysterious lights that not everyone can see. Some people have positive reactions to the lights, but some become angry and one angry observer opens fire on the crowd, killing several bystanders. Despite the massacre, Tori does not want to leave the Lights, so Dan decides to investigate in order to save his marriage and solve the mystery.

This was not what I’d call the usual Morrell thriller, as there’s a touch of science fiction because of the Rostov Lights. Are they a natural phenomenon, a government experiment, ghosts, or possibly alien visitors?

I think Morrell did a great job incorporating the mystery of the Lights, the possible government involvement, the various townsfolk, and the relationship between Dan and Tori. Enjoyed this story much more than his last few books, and am now intrigued about the real-life lights in Marfa that inspired this story.

Gave this book a 4 out of 5 rating as I think the writing was very good, it had a well thought-out plot, and the characters were both believable and interesting. I couldn’t wait to read what came next, and recommend this story to anyone who enjoys a good thriller with a touch of the paranormal!

5 thoughts on “Book Review: The Shimmer by David Morrell”