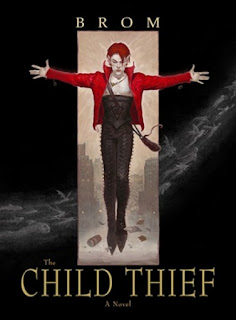 Peter is quick, daring, and full of mischief – and like all boys, he loves to play, though his games often end in blood. His eyes are sparkling gold, and when he graces you with his smile you are his friend for life. He appears to lonely, lost children – the broken, hopeless, and sexually abused – promising to take them to a secret place of great adventure, where magic is alive, and you never grow old. But his promised land is not Neverland. . .

This is not only one of the longest books I’ve read recently, but also one of the most anticipated. I was lusting after this book and really did my best to get my hands on an ARC, but had to settle for borrowing it from the library. Was worried that it might let me down as I was looking forward to it so much, but am happy to report that it was just as good as described! So good that I’m going to buy my own copy, which I rarely do with library reads.

The Child Thief is Peter, a wild child who found refuge on the mythical island of Avalon. Found it interesting that Brom combined the Peter Pan myth with Arthurian legend. Variations of the Lost Boys, Captain Hook, and The Lady of the Lake show up, but in a much darker format. Pretty sure that this book is destined to become a classic, as the story is just that good! Brom is an extremely talented storyteller as well as being a gifted artist.

During this story, we learn Peter’s history as well as follow his struggle to “save” lost children. We also join him on his quest to serve his Lady, try to save Avalon, and defeat Avalon’s enemies. Any more details would probably contain spoilers, so I’ll leave it at this: Read this book and you will not be disappointed! Gave it a 5 out of 5, as I found the book totally captivating! Go! Now! Get yourself a copy! *L*

7 thoughts on “Book Review: The Child Thief by Brom”