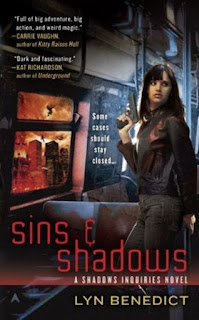 Sylvie Lightner is no ordinary P.I. She specializes in cases involving the unusual, in a world where magic is real, and where death isn’t the worst thing that can happen to you. But when an employee is murdered in front of her, Sylvie has had enough. After years of confounding the dark forces of the Magicus Mundi, she’s closing up shop—until a man claiming to be the God of Justice wants Sylvie to find his lost lover. And he won’t take no for an answer. And so it begins….

Despite the promising blurbs, it took me awhile to get into this story. Sylvie herself isn’t a very sympathetic character, but I liked that her snarky attitude had consequences. Usually, the lead can be sarcastic and impulsive and get away with it, but not Sylvie. People get hurt, and could even die. Fortunately, that seems to bother her, so she’s not a complete monster. However, I couldn’t understand why the secondary characters would be so loyal to her. Maybe there will be more background explanations in future books?

To be honest, I was interested in everyone except Sylvie. Especially liked Eri, the young punk Fury. And Kevin Dunne, a most unusual greek god who was not part of the original gang. The ISI was also an interesting concept, which I hope Benedict explores in more detail in future books.

All in all, after a slow start, I enjoyed this book. I like discovering new series, and look forward to seeing more of Ms Benedict in the future.