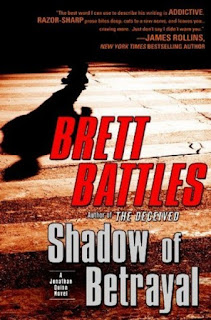 Book Info:• Hardcover: 400 pages
• Reading level: Adult
• Publisher: Delacorte Press (July 7, 2009)
• Language: English
• ISBN-10: 038534158X
• ISBN-13: 978-0385341585
Book Blurb:
The meeting place was carefully chosen: an abandoned church in rural Ireland just after dark. For Jonathan Quinn–a freelance operative and professional “cleaner”–the job was only to observe. If his cleanup skills were needed, it would mean things had gone horribly wrong. But an assassin hidden in a tree assured just that. And suddenly Quinn had four dead bodies to dispose of and one astounding clue–to a mystery that is about to spin wildly out of control.

Three jobs, no questions. That was the deal Quinn had struck with his client at the Office. Unfortunately for him, Ireland was just the first. Now Quinn, along with his colleague and girlfriend–the lethal Orlando–has a new assignment touched off by the killings in Ireland. Their quarry is a U.N. aide worker named Marion Dupuis who has suddenly disappeared from her assignment in war-torn Africa. When Quinn finally catches a glimpse of her, she quickly flees, frantic and scared. And not alone.

For Quinn the assignment has now changed. Find Marion Dupuis, and the child she is protecting, and keep them from harm. If it were only that easy.

Soon Quinn and Orlando find themselves in a bunker in the California hills, where Quinn will unearth a horrifying plot that is about to reach stage critical for a gathering of world leaders–and an act of terror more cunning, and more insidious, than anyone can guess.

One of the things that I liked about this book is that it was presented from several different viewpoints. Most of it is told from Quinn’s point of view, but we also get Marion Dupuis, Peter, and a couple of the ‘bad guys’. It takes a skilled writer to keep the story flowing between narrators, and Battles does an excellent job.
We start off in Ireland, when a routine exchange ends in the death of four men and Quinn, with the help of his apprentice Nate, must clean up the mess. Things then switch to Marion, a UN worker in a small West African country. There are rumors that special needs children are being rounded up by soldiers, but no one knows why. Trying to help save a little girl with Down Syndrome, Marion is soon over her head and running for their lives.
This book kept me guessing, and the reason why the children were being rounded up is truly chilling. Battles keeps the story going at a good pace, and the ending was well done and satisfying.
This is the third book in the series featuring Quinn as a “cleaner” and while I’d recommend reading them in order, this one can certainly stand on it’s own. This is an unusual series in that things that happen in one book reverberate in the others. For instance, something happened to Nate in an earlier book and Quinn is still dealing with it in this one. And it’s nice to see Orlando again, and watch her interaction with Quinn. I can highly recommend this book, and am looking forward to the next Quinn adventure!
This content is owned and copyrighted by alexia561.blogspot.com.

3 thoughts on “Book Review: Shadow of Betrayal by Brett Battles”