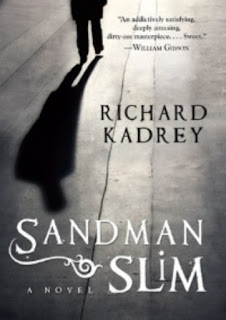 Life sucks, and then you die. Or, if you’re James Stark, you spend eleven years in Hell as a hitman before finally escaping, only to land back in the hell-on-earth that is Los Angeles.

Now Stark’s back, and ready for revenge. And absolution, and maybe even love. But when his first stop saddles him with an abusive talking head, Stark discovers that the road to absolution and revenge is much longer than you’d expect, and both Heaven and Hell have their own ideas for his future.

Stark was a cocky young magician who was betrayed and sent to hell by jealous fellow magicians. After managing to survive eleven long years, first as a sideshow attraction and then as a hitman, he manages to escape and returns to LA with revenge on his mind. After surviving the demons of hell, LA should be a cakewalk.

He wants revenge not just for sending him to hell, but also for the murder of his girlfriend. With a little help from new friends and old, Stark tracks down his old magician “friends” and gets to work. But no matter how much of a bad guy he believes he is, Stark can’t seem to help doing a good deed every now and then. He’s one of those heroes who does the right thing for maybe the wrong reasons, but still saves the day.

Read this book in one day, which is unbelievably fast for me. But it was so good that I couldn’t wait to see what happened next! It’s got dark humor, which I love, and is a little gritty. Be warned that Stark doesn’t think much of angels or demons and lets them know it, so if you’re easily offended, then this book isn’t for you. Would love to see this turned into a series, as I’d like to see Stark again. Gave this book 4 stars as it was well written, fast paced, and darkly humorous.