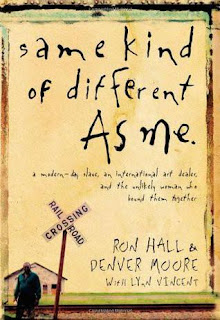 Same Kind of Different as Me by Ron Hall & Denver Moore

Meet Denver, a man raised under plantation-style slavery in Louisiana in the 1960s; a man who escaped, hopping a train to wander, homeless, for eighteen years on the streets of Dallas, Texas. No longer a slave, Denver’s life was still hopeless – until God moved. First came a godly woman who prayed, listened, and obeyed. And then came her husband, Ron, an international arts dealer at home in a world of Armani-suited millionaires. And then they all came together.

But slavery takes many forms. Deborah discovers that she has cancer. In the face of possible death, she charges her husband to rescue Denver. Who will be saved, and who will be lost? What is the future for these unlikely three? What is God doing?

Same Kind of Different As Me is the emotional story of their story: a telling of pain and laughter, doubt and tears, dug out between the bondages of this earth and the free possibility of heaven. No reader will ever forget it. (Goodreads)

This book is a perfect example of why I shouldn’t judge a book by its cover! After seeing the cover and reading the synopsis, I decided that I’d skip reading this one despite it being the monthly pick for my bookclub. Because after all, I don’t normally read non-fiction or religious books (jeez, I sound so pretentious and snooty!). Then I felt guilty. So I climbed down off my high horse, downloaded a sample on my nook and, by the end of the sample, I was hooked and immediately downloaded the rest! Lesson learned!
Some of the members of my bookclub didn’t finish this one as they got bored and didn’t care for Denver, but I found myself sucked in by the excellent writing and actually enjoyed Denver’s “unique” voice.
Denver and Ron take turns narrating their story, and it’s easy to tell who is speaking because Denver has a strong accent and uses slang quite a bit. Their stories were more interesting than I expected, and I really grew to care about them. Actually got tears in my eyes during Deborah’s battle with cancer!
Faith is a strong component in their lives, but I appreciated that there was no preaching involved and that it was just presented as a matter-of-fact part of their lives. I think part of the reason I don’t enjoy books with a religious bent is because I don’t enjoy being preached to, so I think that the religious aspects of this story were well handled.
Sincerely hope that I remember to never judge a book by its cover/synopsis again and to at least read a few paragraphs first, as I wound up really liking this story! I found Denver the more interesting man, as his life has been totally different than mine. Ron was a little irritating at times, but he grew on me as well. Well worth the read if you enjoy non-fiction. Or even if you don’t and just want an interesting, well-written story!
This content is owned and copyrighted by alexia561.blogspot.com.