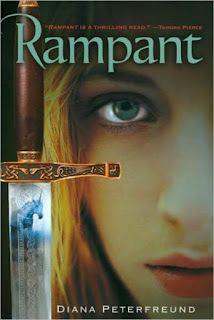 Forget everything you ever knew about unicorns . . .

Real unicorns are venomous, man-eating monsters with huge fangs and razor-sharp horns. Fortunately, they’ve been extinct for a hundred and fifty years. Or not.

Astrid had always scoffed at her eccentric mother’s stories about killer unicorns. But when one of the monsters attacks her boyfriend – thereby ruining any chance of him taking her to the prom – Astrid finds herself headed to Rome to train as a unicorn hunter at the ancient cloisters the hunters have used for centuries.

However, at the cloisters all is not what it seems. Outside, the unicorns wait to attack. And within, Astrid faces other, unexpected threats: from the crumbling, bone-covered walls that vibrate with a terrible power to the hidden agendas of her fellow hunters to – perhaps most dangerously of all – her growing attraction to a handsome art student . . . an attraction that could jeopardize everything.

Had heard about this book on various blogs, but my initial thought was: killer unicorns? Yeah, right! But people kept raving about it, so decided to take a look. The first page had me hooked, and I stayed up much too late to finish reading it! This is one of my favorite types of books, in that it grabbed me by the throat and wouldn’t let go!

Astrid is the main character, who grew up thinking her mother was more than a little crazy because she insisted that they were descendants of unicorn hunters. Then one night her new boyfriend is attacked by a unicorn! Before she knows it, Astrid is shipped off to Rome to begin her training as a unicorn hunter. Unfortunately, the training turns out to be trial & error as the order was disbanded way back when the unicorns were thought to be extinct, and it’s left to a bunch of teenagers (and one young man) to try to figure things out.

While the idea of killer unicorns and virgin hunters may be a little out there, Diana does a great job of making it all seem entirely possible. It doesn’t hurt that Astrid is a skeptic as well, and we come to terms with the situation together.

All in all, this was a great read and I recommend that everyone give it a chance. Had an interesting well-paced plot, good writing, and believable characters. Plus, I adored Bonegrinder, the baby unicorn! Gave it my highest rating as I didn’t want to put it down despite having to work the next day.