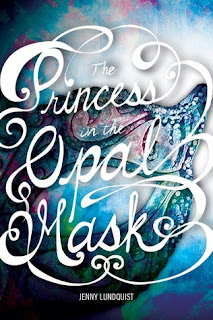 Princess in the Opal Mask by Jenny Lundquist

Every Fairy-Tale Ending Has a Price….

Orphaned as a child in the crumbling village of Tulan, Elara is determined to learn her true identity, even if it means wielding a dagger. Meanwhile, in Galandria’s royal capital, Princess Wilha stands out as someone to either worship or fear. Though no one knows why the king has always made her conceal her face – including Wilha herself.

When an assassination attempt threatens the peace of neighboring kingdoms, Elara and Wilha are brought face to face . . . with a chance at claiming new identities. However, with dark revelations now surfacing, both girls will need to decide if brighter futures are worth the binding risks. (Goodreads)

Elara is an orphan, raised by a family who doesn’t love her and treats her like a slave. Princess Wilha has been raised as royalty, but also feels unloved and doesn’t understand why she is required to wear a mask at all times. These two girls are our narrators, and both are fascinating characters.
Just like Cinderella, Elara gets a chance to go to a royal ball! The ball is in celebration of Wilha’s birthday, but she’s not very happy at being put on display yet again. It’s tough being stared at all of the time because of her mask, and the rumors about why she has to wear it can be hurtful to a sheltered princess.

Brought together after an assassination attempt on the royal family, both girls find out startling information about their pasts. Sent together to a neighboring kingdom, Wilha and Elera both discover hidden strengths.

Of the two, I found myself relating to Wilha more so than Elera, as Elera seemed somewhat harder and less sympathetic. Of course, Elera had a much tougher childhood than the princess, but I just didn’t connect with her like I thought I would. And I was surprised by how much I came to like Wilha, as I found her weak and uninteresting at first. She really grew on me!

Found this to be a good start to a new series, with interesting characters and a good storyline. While I found a few plot points a little odd, everything came together well and I’m looking forward to seeing where the author takes the story next!

Review copy provided by Running Press Publicity in exchange for an honest review
This content is owned and copyrighted by alexia561.blogspot.com.