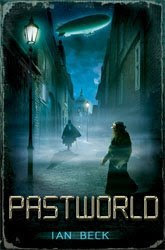 Book Blurb:What if all of London were really an amusement park – a whole city returned to Victorian times to entertain visitors from the twenty-first century? That’s the wildly original premise of Ian Beck’s Pastworld, a high-stakes mystery set in a simulated past.

Eve is a lifelong resident of Pastworld who doesn’t know she’s living in a theme park until a mysterious threat forces her to leave home. Caleb is a visiting tourist who finds the lawlessness of the past thrilling – until he suddenly becomes a fugitive from an antiquated justice system. And in the midst of it all, in the thick London fog a dark and deadly figure prowls, claiming victim after victim. He’s the Fantom, a creature both of the past and of the present, in whose dark purpose Caleb and Eve will find their destinies combined.

My Review:I first saw this book mentioned by Carrie over at Carrie’s YA Bookshelf. It kept popping up on various blogs, so put my name on the list to borrow it from the library. Was well worth it, as I think it’s a very original story, with a twist I should have seen coming but didn’t!

One of the things that I enjoyed about the book is that each chapter is narrated by a different character. We have excerpts from Eve’s journal, then the next chapter might be from Caleb or Bible J or a policemen, then back to Eve. The different voices weren’t hard to keep track of, and I thought having several different viewpoints only enhanced the story.

Found the whole idea of turning an old section of London into a giant theme park for the rich remarkably believable, and thought Beck was able to keep the story moving along nicely even when switching from narrator to narrator. Don’t want to give away too much of the plot as there were a few nice surprises along the way, but I will say that I liked most of the characters and that the unlikable characters were all villains.

Gave this book a 4/5 rating. Thought the writing was very well done, the characters were all well developed, and the plot was original and compelling. I’ve seen a few comparisons to The Truman Show, but I didn’t think they were similar at all. I don’t think that this was too violent for a YA book, as video games are much more violent and bloody. All in all, I’d recommend this book!