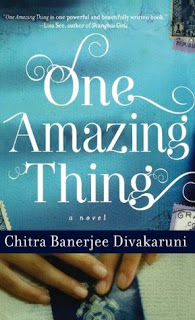 Book Blurb:
Late afternoon sun sneaks through the windows of a passport and visa office in an unnamed American city. Most customers, and even most office workers have come and gone, but nine people remain. A punky teenager with an unexpected gift. An upper-class Caucasian couple whose relationship is disintegrating. A young Muslim-American man struggling with the fallout of 9/11. A graduate student haunted by a question about love. An African-American ex-soldier searching for redemption. A Chinese grandmother with a secret past. And two visa office workers on the verge of an adulterous affair.

When an earthquake rips through the afternoon lull, trapping these nine characters together, their focus first jolts to their collective struggle to survive. There’s little food. The office begins to flood. Then, at a moment when the psychological and emotional stress seems nearly too much for them to bear, the young graduate student suggests that each tell a personal tale, “one amazing thing” from their lives, which they have never told anyone before. And as their surprising stories of romance, marriage, family, political upheaval, and self-discovery unfold against the urgency of their life-or-death circumstances, the novel proves the transcendent power of stories and the meaningfulness of human expression itself.

My Review:
Really enjoyed this book! The author does a good job of introducing us to the nine people waiting, and then trapped in the office after an earthquake. At first, we get just a general idea of who they are through Uma’s eyes, the young graduate student mentioned in the blurb. But as each shares their story, we get to know them a little bit better.

We meet Lily, the Chinese teenager with the pierced eyebrow, and her elderly grandmother who has a secret of her own. Tariq, the angry young Muslim-American. Cameron, the ex-soldier who the others turn to for guidance. Mr. and Mrs. Pritchett, the upper-class couple with a shaky marriage and secrets of their own. Mr. Mangalam, the handsome visa officer. And Malathi, the young woman manning the customer service desk.

Each story is fascinating in it’s own way. Didn’t find it hard to keep track of who was telling the story as Chitra made it clear at the beginning of each chapter. I think my favorite tale was Jiang’s, Lily’s grandmother. Loved how she surprised her granddaughter with one of her secrets! Malathi’s story was engrossing as well, with a surprise I didn’t expect but really appreciated. And Mr. Pritchett’s story was a little heart-breaking. Actually, they were all good stories!

Gave this a 4/5 rating as I really enjoyed the book. Chitra is a very talented writer, and some of the passages were simply beautiful. She kept control of the story, and the nine different narrators were easy to keep track of while still advancing the plot. You could feel yourself trapped with the survivors, and understood their desire to share their stories in order to pass the time. Loved the writing, the characters, and even the ending. It just seemed right. Highly recommend this one, and I’ll definitely be reading more of Chitra’s books!