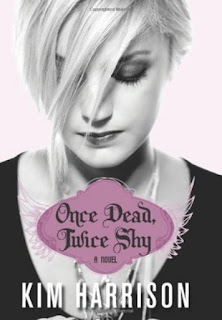 Book Blurb:
“My name is Madison Avery, and I’m here to tell you that there’s more out there than you can see, hear, or touch. Because I’m there. Seeing it. Touching it. Living it.”

Madison’s prom was killer — literally. For some reason she’s been targeted by a dark reaper — yeah, that kind of reaper — intent on getting rid of her, body and soul. But before the reaper could finish the job, Madison was able to snag his strange, glowing amulet and get away.

Now she’s stuck on Earth — dead but not gone. Somehow the amulet gives her the illusion of a body, allowing her to toe the line between life and death. She still doesn’t know why the dark reaper is after her, but she’s not about to just sit around and let fate take its course.

With a little ingenuity, some light-bending, and the help of a light reaper (one of the good guys! Maybe . . . ), her cute crush, and oh yeah, her guardian angel, Madison’s ready to take control of her own destiny once and for all, before it takes control of her.

Well, if she believed in that stuff.

Madison is the new girl in town, just trying to fit in. Doesn’t matter that she just happens to be dead. Barnabas, a light reaper who is trying to teach Madison how to use her new amulet, does his best but something just isn’t right. Not only can’t she figure out how to use the amulet, but she also has to deal with all of the dramas of being a teenager as well.

I don’t like spoilers in reviews, so let’s just say that Madison is caught in the middle of the classic struggle: Dark vs. Light, Fate vs. Choice, Hot Reaper vs. Hot Teenage Boy. Madison comes across as a believable teenager who is smart and resourceful, but still human enough to make mistakes. And I loved the guardian angel!

These characters seemed oddly familiar and I finally figured out that I had met them before. Kim had originally introduced them in the anthology Prom Nights from Hell. It might help to read Madison Avery and the Dim Reaper first for the back story, but this book can certainly stand on it’s own. All in all I think this is the start of another good series for Kim! Can’t wait to see what happens next.