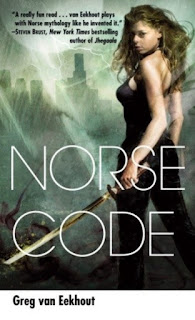 The NorseCODE genome project was designed to identify descendants of Odin. What it found was Kathy Castillo, a murdered MBA student brought back from the dead to serve as a Valkyrie in the Norse god’s army. Given a sword and a new name, Mist’s job is to recruit soldiers for the war between the gods at the end of the world – and to kill those who refuse to fight. But as the twilight of the gods descends, Mist makes other plans.

This book was amazing! I gave it 5 stars for sheer originality as well as for having great characters and a good plotline. I mean, honestly, how many books have you ever come across featuring the Norse gods and Ragnarok? I vaguely remember Odin and Loki, but the other mythology was new to me. Greg did a great job of providing short backgrounds when necessary, and made it easy to keep track of everyone.

Mist is a new Valkyrie who is not really comfortable with her job of finding new recruits for the final battle between the gods. On her very first job, when her first recruit is deemed unworthy and is set on the road to Helheim (the land of the dead), Mist decides to embark on a rescue mission. She will not only rescue her recruit, but also her murdered sister. To do this, she needs the help of the only one to ever go to Helheim and back, the Norse god Hermod.

Hermod has problems of his own and would rather just be left alone, but somehow winds up accompanying Mist on her rescue mission. Along with her bodyguard Grimnir and Hermod’s loyal dog Winston, they set off on the adventure to end all adventures. And hey, while they’re at it, why not prevent the end of the world as well?