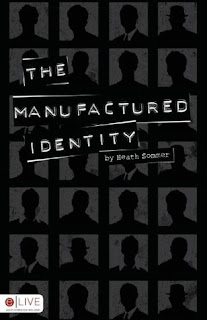 Book Blurb:
Months after his mysterious disappearance from a routine fishing trip, no one really expects over-the-hill Texas housewife Lory Latchley to find her missing husband – especially her husband. The Manufactured Identity is clinical psychologist Heath Sommer’s ever-escalating immersion into the world of unlikely friends who each awaken to find their faithful companions missing without warning or reason. Desperate to find meaning in their pain, they are thrust by the auspices of fate into a common thread of mystery and human frailty. In the end, the fate of all may reside in the unstable hands of rookie pastor John Joe, but ultimately Lory and her new found partners will uncover a truth so unnerving it makes even infidelity look palatable.

My Review:
Not really sure what to make of this book. The synopsis sounded interesting enough, but it was a very confusing read for me. Put this book down several times only to pick it up again, as I was determined to figure out what was going on. This one was a struggle for me to read, and now to review.

We have a prologue with two men in the desert, but I’ve found that most prologues don’t make sense until after you’ve finished the book, so take them with a grain of salt. The proper story starts off by introducing us to a man who wakes up on a park bench, not sure how he got there and whether or not he’s been mugged. Chapter 2 introduces us to Lory Latchley, whose husband has been missing for two weeks. We find out in chapter 3 that the man from chapter 1 is Curtis Rowly. At this point, I’m not sure what Lory and Curtis have to do with one another, but figure that the chapters will alternate between these two and will eventually make sense.

After 5 chapters, we come to Part 2 of 4. What a minute…who’s Addy? Who’s Ann? John Joe? Pete? So many new characters being introduced, and none of them seem to be related in any way. What happened to Curtis and Lory? Who are all of these new people? Do I need to take notes?

The writing is a little choppy and the story doesn’t flow as smoothly as I like. Some of the descriptive passages were a little confusing, and I needed to read them a few times to try and figure out what the author meant. It also felt like some parts were missing or inconsistent. For instance, someone who was referred to as missing is now suddenly dead. When did that happen? Sommer is obviously an intelligent person and knows his stuff, but this book just didn’t work for me. All of the bouncing back and forth between the large cast of characters kept throwing me, as I had to go back and reread parts to remind myself who was who.

Maybe I simply wasn’t the right reviewer for this book, as it was a struggle that left me unsatisfied when finally finished. Other reviewers have sung the book’s praises and raved about it, but it just wasn’t my cup of tea. Gave it a 2/5 rating as while I finished it, I didn’t really enjoy it. Sorry.

About the Author:
Doctor Heath Sommer earned his Ph.D. in clinical psychology from Idaho State University and holds an additional degree in Marriage, Family, and Human Development. A native of Sacramento, California, he has enjoyed many opportunities for public speaking and regularly conducts workshops/gives lectures on psychologically related as well as theologically related domains. In addition to his literary interests, Dr. Sommer specializes in the assessment and treatment of trauma, anxiety, and marriage, family, and child development. The success of his breakout suspense novel, The Manufactured Identity, has lead to the publication of two more novels in The Manufactured Identity Series, The Grand Delusion, and The Human Obsession due for release in 2010.