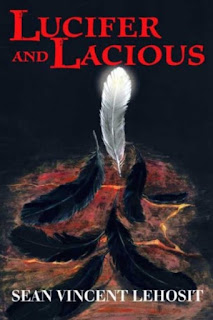 Book Blurb:
”The underworld is a place where few men intend to arrive. When a man pictures death, he pictures blue clouds and golden gates…the underworld does not have blue clouds, but fog of ash that rises from the misery of men. There are no golden gates, only rusty fences circling pools of human waste. You do not hear children’s laughter but the screams of guilty souls. Yes, this is the underworld.”

This is the reality that faces our nameless protagonist, soon to be known as Slave, as he wakes to find himself face to face with grotesque demons and unimaginable abuse at their hands. Still, while he is unable to recall his name or how he came to be there, the numbers that Lucifer carves into his forehead seem to clue everyone else – demons and damned alike – that he is somehow special. Lucifer and Lacious weaves an imaginative journey through the pits of hell as Slave strives to elude the others’ evil intentions for him while trying to regain his memory and achieve his true purpose.

My Review:
I’m really not sure how to review this book. It’s incredibly descriptive with an interesting premise, yet also very graphic and violent. But I guess you have to be a little graphic and violent when describing demons and the seven pits of hell. It just seemed a little too raw for my tastes.

The main character is called Slave, as he does not remember his name or anything about his previous life. Lucifer seems to take a special interest in the fact he can’t remember his name and carves strange numbers into Slave’s forehead. Overall, Slave seemed a bit passive to me until he met Stranger, who pushed him into journeying deeper into hell. Despite decades toiling in hell and surviving punishment after punishment, Slave seemed to place his trust in Stranger awfully fast.

Stranger and Slave meet several different, interesting characters during their journey, but I kept wishing that Slave wasn’t quite so trusting. Stranger seemed to have a plan, but wasn’t entirely truthful in sharing it with Slave. And to be honest, I didn’t really get the ending. I understood it, but didn’t “get” it, if you know what I mean.

All in all, this was an interesting, quick read. I gave it a 3 out of 5 rating because I thought that while the story could have been a little more polished, the author has talent and imagination. Would be interested in reading other works by Lehosit, as he can write!