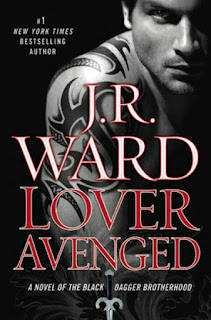 From Publishers Weekly:Ward powers into hardcover with the tangled seventh title in the Black Dagger Brotherhood series, picking up four months after the end of 2008’s Lover Enshrined. Rehvenge, a symphath vampire who gets energy from manipulating others’ emotions, is recruited by a group who want to displace vampire king Wrath, a gruff, determined vigilante. Rehvenge is also falling hard for vampire nurse Ehlena, who disdains his affections and focuses on caring for her ailing father. Ward easily juggles numerous personal and political plot lines, keeping the tension revved high while moving forward with subplots that have lingered for several books and will please longtime fans seeking resolution. New readers may be a little lost despite a helpful glossary, but the fast pace and cliffhanger ending will have fans wishing they could start the next book right away.

Review:
Let me start off by making it clear that I’m a fan of the Black Dagger Brotherhood series. I feel like I know the brothers, and enjoy catching up with them and watching their progress in the war against the Lessers. But despite the fact that I’m a fan, this book was a disappointment and I don’t think it lived up to the rest of the series.

This was supposed to be Rehvenge’s story, yet there were too many other storylines screaming for attention. There was Wrath’s struggle with being king, the John Matthew and Xhex will-they/won’t-they dance, Lash dealing with the Lessers, and even a plot cooked up by some of the Glymera. I found myself skipping over parts trying to find Rehvenge and Ehlena’s part of the story.

As much as I love Wrath and John Matthew, Wrath already had his turn and John Matthew’s story should be coming out sooner or later. There were too many distractions and not enough time spent on the two main characters. I felt cheated, and a little outraged on Rehvenge’s behalf! *L*

Because of all of the side stories and distractions, I only gave this one 3 out of 5 stars. I’m glad I borrowed it from the library instead of buying it, as it was a little on the disappointing side.