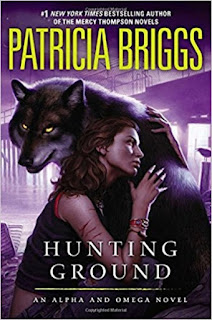 Mated to werewolf Charles Cornick, the son – and enforcer – of the leader of the North American werewolves, Anna Latham now knows how dangerous being a werewolf is, especially when a werewolf (who) opposes Charles and his father is struck down. Charles’s reputation makes him the prime suspect, and the penalty for the crime is execution. Now Anna and Charles must combine their talents to hunt down the real killer – or Charles will take the fall.

This is the second book featuring Anna, who is an Omega werewolf, and her new husband Charles. Omegas are rare and seem to have a calming effect on other werewolves. As there aren’t that many, no one is really sure what an Omega is capable of, so Anna is sort of learning as she goes. I would recommend reading the first book in the series, Cry Wolf, for the background but it isn’t necessary for this story. I really like Anna and Charles and was glad to see them again, and enjoyed watching their relationship evolve.

The premise in this book is that Anna and Charles attend a werewolf summit in order to address the concerns of other packs about the North American pack’s plan to announce their presence. As humans aren’t aware that werewolves are real, this is a big deal. Charles’ father was originally scheduled to attend, as it is his plan, but was talked out of it by Charles due to a premonition. Charles premonitions tend to be correct, so Charles and Anna attend the summit instead of Bran.

The summit does not start well, as being around so many alpha werewolves is very hard on Anna. Then Anna and her escorts are attacked while out in public, which starts a whole series of events which Anna and Charles must resolve. While I did like Anna coming a little bit more into her own, there was just something about the storyline that didn’t sit well with me. Not sure if it was the Fae summit mediator, the other alpha werewolves, or the vampire gang, but something seemed off. Patricia Briggs is very talented and overall I did enjoy the book. I’m looking forward to the next in the series, but could do without all of the additional players. I kept going back and forth on whether I should rate this a 3 or a 4, but decided on a 3 as there was just something off about this one….still a good read, just not as good as the usual Briggs book.