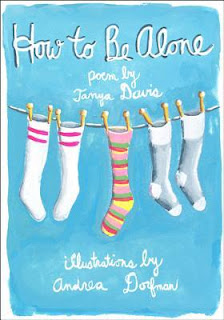 How to Be Alone by Tanya Davis, illustrated by Andrea Dorfman

If you are, at first, lonely be patient. If you’ve not been alone much or if, when you were, you weren’t okay with it then just wait…

Since its debut on YouTube, Tanya Davis’s beautiful and perceptive poem, How to Be Alone, visually realized by artist and filmmaker Andrea Dorfman, has become an international sensation. Her wise and perceptive words, vivid in their evocation of solitude’s beauty and calm, have touched millions. Now her poem’s deep eloquence and compelling illustrations have been adapted for the page in this beautiful, meditative volume, a keepsake to treasure and to share.

From a solitary walk in the woods to sitting unaccompanied on a city park bench to eating a meal and even dancing alone, Tanya reveals the possibilities and joys waiting to be discovered when we engage in activities on our own. As she soothes the disquietude that accompanies the fear of aloneness, and celebrates the power of solitude to change how we see ourselves and the world, Tanya revels how, removed from the noise and distractions of other lives, we can find acceptance and grace within.

For those who have never been by themselves and those who feel lost or lonely on their own, this moving work encourages us to recognize and embrace the possibilities of being alone-and reminds us of a universe of joy, peace, and discovery waiting to unfold. (Goodreads)

While I don’t usually read poetry, I was intrigued by the thought of an illustrated poem. I hadn’t heard of it, but this was apparently a YouTube sensation with over 6 million views. Wow! Guess I’m out of the YouTube loop.
As an introvert, I enjoy being alone and was curious to see what the poet and illustrator had to say about my favorite state of being. Some of the suggestions, like the library and movie theater, are tried and true favorites. Others, like a coffee shop or lunch counter, I still haven’t worked up the courage to try.
The illustrations that accompany the poem are charming. I especially enjoyed the artistic comparison of being alone to a single sock. We all have a single sock or two hanging around, but it doesn’t have to be a sad thing if embraced as lovely and unique.
The description I keep coming back to is charming. I don’t know if I would have purchased this book for myself, but think it would make a lovely stocking stuffer for the holidays.

Tanya Davis is a Canadian singer-songwriter and poet. Since bursting onto the Halifax music scene in 2006 with her debut, Make A List, Tanya has garnered praise from industry, audience, and peers, as well as multiple award nominations, including one for her sophomore release, Gorgeous Morning, for the 2009 ECMA Female Recording of the Year.
Andrea Dorfman works as a filmmaker, animator, cinematographer, and artist. A graduate of McGill University and the Nova Scotia College of Art and Design, she has made numerous experimental and dramatic short films as well as two feature films, Parsley Days and Love That Boy. She lives in Halifax, Nova Scotia.
Review copy provided by the publisher, in exchange for an honest review
This content is owned and copyrighted by alexia561.blogspot.com.