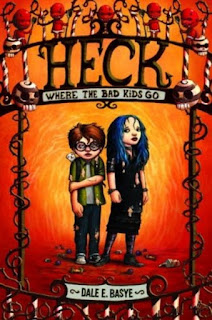 Book Blurb:
When Milton and Marlo Fauster die in a marshmallow bear explosion, they get sent straight to Heck, an otherworldly reform school. Milton can understand why his kleptomaniac sister is here, but Milton is—or was—a model citizen. Has a mistake been made? Not according to Bea “Elsa” Bubb, the Principal of Darkness. She doesn’t make mistakes. She personally sees to it that Heck—whether it be home-ec class with Lizzie Borden, ethics with Richard Nixon, or gym with Blackbeard the Pirate—is especially, well, heckish for the Fausters. Will Milton and Marlo find a way to escape? Or are they stuck here for all eternity, or until they turn 18, whichever comes first?

My Review:
I really enjoyed following Milton and his older sister Marlo’s adventures as they do their best to escape Limbo before being permanently assigned to one of the deeper circles. Turns out that there are 9 circles in Heck: Limbo, Rapacia, Blimpo, Fibble, Snivel, Precocia, Lipptor, Sadia, and Dupli-city. Don’t know if that means that there will be 9 books in the series, but it should be fun!

This book is supposed to be geared for the 9-12 age group, but I don’t know if they will get some of the pop culture references. For instance, I got a kick out of Richard Nixon teaching an ethics class, but does that age group even know who Richard Nixon is? Or Lizzie Borden for that matter? And I’d be shocked if they had any idea who Anubis was! FYI, he was the Egyptian god of the underworld who had the head of a jackal.

This was a fun, quick read, but I don’t know that I would give a copy to my 8 year old niece. Parts of the book were cute and funny, but other bits seemed to be aiming for disgusting. For instance, did we really need such graphic details of Milton & company crawling through the sewers? I’d recommend it for adults who enjoy YA fiction, and maybe read it with your child in order to explain certain things. But in the end, I really liked the marshmallow bear explosion! *L*