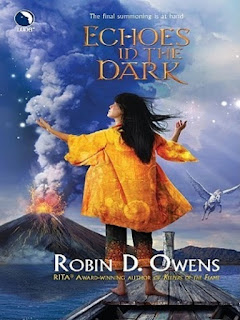 The planet is dying, slowly being drained by an alien Dark, and only one last, desperate plan can save it.

Deep in another dimension, a disillusioned young singer is summoned as Lladrana’s last hope. Uncertain of her future, unaware of her extraordinary magical talent, Jikata will be the sixth and final outsider – Exotique – to step through a dangerous portal of prophecy and magic. Survival will require her to forge closer friendships than she has ever known. The price of those bonds will threaten the very fate of Lladrana: a world where music holds the key to an ancient mystery – and six women will wage the ultimate battle against the forces of Dark.

This was one of my favorite series! Loved the six Exotiques – ordinary women who became extraordinary in their fight to save their adopted homeworld.

I sort of wish that Raine had her own book and didn’t have to share with Jikata, but that was my only quibble with this story. Both of these women were strong and resourceful, although very different. Of the two, I liked Raine’s story better and felt that she was the more sympathetic character.

And I got a kick out of seeing the other Exotiques again! They’re like old friends at this point. I think Alexa is my favorite, and not just because of her name! 🙂

As the last of the series, this was focused more on the final battle with the Dark as opposed to building a romantic relationship between the Exotique and a Llandran male. Still a satisfying story though, and a great ending! I highly recommend this whole series! Sad to see these ladies go….