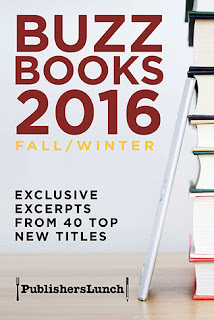 The ninth Buzz Books edition evokes all the excitement of BEA with substantial excerpts from 40 of the most highly-touted books to be published this fall/winter.

Another great collection of samples for the upcoming Fall/Winter season! Here are some of the titles that left me wanting more!

Christina’s World by Christina Baker Kline is about the woman behind Andrew Wyeth’s iconic painting. She intrigued me and the story left me wanting to learn more, so definitely adding this to my wishlist.

A friendly dinner party between neighbors turns into a suspenseful thriller when a baby goes missing. In Shari Lapena’s The Couple Next Door, a couple’s decision to leave their six month old daughter at home while they go next door for dinner turns terrifying. Coming home, they discover the front door open and their baby missing. Who knew that their baby sitter had cancelled at the last minute? Was someone watching the house? Where is baby Cora? And what are the parents hiding? Can’t wait to find out!

Today Will Be Different by Maria Semple had me from the title. I don’t know how many times I’ve woken up in the morning vowing that today would be different and that I’d be productive and creative and yada yada yada. So I felt like I could relate to Elenor right off the bat. And I did! Definitely on my wishlist!

Historical novels are not my usual cup of tea, especially foreign historical novels. What can I say, I like my modern conveniences! But A Gentleman In Moscow by Amor Towles had me wanting to learn more about Count Alexander Rostov. Sentenced by a 1920’s Bolshevik tribunal to house arrest in a grand hotel, the count finds himself confined to an attic room instead of the luxury suite expected. The count seems to take this in stride, piquing my curiosity about this Russian aristocrat.

My favorite sample in this collection has to be All Our Wrong Todays by Elan Mastai. Really loved the voice of the narrator as he tries to tell his story. Seems that he stole his father’s time machine and accidentally ruined the future. We were supposed to have all the wonderful inventions mentioned in The Jetsons, like flying cars and robot maids. But Tom screwed it up. Now he has to decide if he can fix the future or if he wants to stay in the present and make a new life. I don’t know about you, but I want those flying cars so am rooting for him to fix the future!

The last sample to catch my eye was a memoir by Mara Wilson called Where Am I Now?. Non-fiction, especially memoirs, aren’t usually my thing but I really liked Mara’s voice. Can’t say that I was ever a fan of hers, although I have vague memories of the Mrs Doubtfire movie.

This sampler was chock full of excerpts so sure to please all readers! Already looking forward to the next collection!