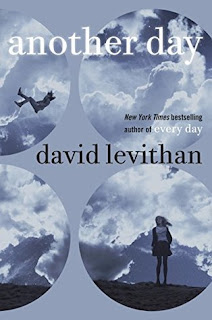 In this enthralling companion to his New York Times bestseller Every Day, David Levithan tells Rhiannon’s side of the story as she seeks to discover the truth about love and how it can change you.

Every day is the same for Rhiannon. She has accepted her life, convinced herself that she deserves her distant, temperamental boyfriend, Justin, even established guidelines by which to live: Don’t be too needy. Avoid upsetting him. Never get your hopes up.

Until the morning everything changes. Justin seems to see her, to want to be with her for the first time, and they share a perfect day – a perfect day Justin doesn’t remember the next morning. Confused, depressed, and desperate for another day as great as that one, Rhiannon starts questioning everything. Then, one day, a stranger tells her that the Justin she spent that day with, the one who made her feel like a real person . . . wasn’t Justin at all. (Goodreads)

The author states at the beginning of the book that Another Day isn’t really a sequel to Every Day, but more of a companion piece. He’s right.

While you could probably read it as a stand-alone, I think that the overall experience will be richer if you read them both. It’s basically the same story, but told from different points of view. While Every Day was A’s story, Another Day is Rhiannon’s version.

While I enjoyed the first book, I really liked seeing things from Rhiannon’s perspective. I think it takes a special kind of person to accept A’s unusual circumstances and, after getting to know her, we discover that Rhiannon is that person.

Like most teenage girls, Rhiannon doesn’t think that she’s anything special and puts up with a not-great boyfriend. She’s always making excuses and walking on eggshells around him, then one day Justin surprises her by taking her to the beach. It’s a perfect day and Justin actually seems happy. Too bad it wasn’t really Justin.

While A’s story sounds incredibly strange, Rhiannon eventually believes him. She not only likes A, but really, really likes him. Or is A a her? Admittedly, it’s more than a little confusing.

Adjusting to the outer package is harder than she thought, even though Rhiannon likes the inner A. That causes more than a few problems for the two.

Really enjoyed both of these books! It’s a clever premise with interesting characters that left me wanting more! I really hope that the author writes another book to let us know what happens to A and Rhiannon next!